Last weekend I decided to take a weekend trip to the city of Tokyo (東京) in Japan (日本). You see, I hadn’t been to Tokyo (東京) in a while and I felt like a trip was needed, especially since my plans for Golden Week, a week off from work due to a bunch of holidays, fell through earlier this month.

I arrived in Tokyo (東京) Saturday, May 18th around lunch time. It doesn’t seem to matter how many times I visit this city, arriving at it’s main train station, I always wind up feeling lost. I suppose it’s my fault for not learning enough Japanese. Anyways, as I moved my way through Tokyo Station (東京都) things started to feel familiar, a lost familiarity if you will. I’m not sure that made sense so let me try a different approach. While walking through the station, though I felt lost, the feeling was a familiar one which meant (for me) that I was in the right place and things would be just fine. Lo and behold, I was right. I ended up at the eastern side of the station which borders the city’s busy business district, Marunouchi (丸の内). Like I mentioned before, I hadn’t been to Tokyo (東京)in a while, so colour me surprised to see the massive face-lift that was given to the area around the station.

I stood around taking in the view as I watched residents and visitors alike, snap photos, share in laughter and glare at their phones, probably playing some type of game or browsing an app. Whatever it was, their eyes were locked to the screens. Then it hit me, I was once again in this beautiful city, alone with no one to take my pictures for me. LOL. Didn’t expect that, did you? If you’re honest with yourself, you would agree. One of the worst things on a trip is not having someone there to capture the moments in full. I mean it works both ways, so I would capture their moments too. Then it hit me again, I left my digital camera at home along with the tripod stand and the selfie stick. My trip was going south, it seemed. I sat on my suitcase with my backpack to the side, while I pondered how I’d ask someone to take my picture. The things we fuss about. Haha! As the minutes turned to hours, I envisioned myself in a campaign for Wanderlust, American Tourister or my fav brand at the moment, Bershka. In my head I looked hella fly (do people still say that? LOL) and I could hear Patrick Demarchelier giving me direction on what it is he wanted. I watched too much America’s Next Top Model, don’t judge me. I looked down at my phone and realised it was almost 3pm and I still didn’t have a picture that wasn’t a selfie.

I don’t really like to bother people so I had to build up the courage and the shamelessness of it all. LOL. A Japanese guy was standing right next to me, taking his shots of the station, so I pulled out the few Japanese words I knew to put together from a desolate part of my brain and said すみません写真を撮ってください？In other words, “sumimasen, shashin o totte kudasai?” This basically means “excuse me, could you take my picture, please?” The kind sir obliged and took not one, but two photos. Having this new found courage, I then asked another Japanese man the same question, to see if he could give me more choices to choose from. He was with his son and I welcomed him to crash my picture. The little guy was a trooper and unlike many Japanese kids who cry or shy away from foreigners, he was more than happy to pose with me. Teamwork! Unfortunately, I can’t upload any pictures of kids on the internet without their parents’ consent. 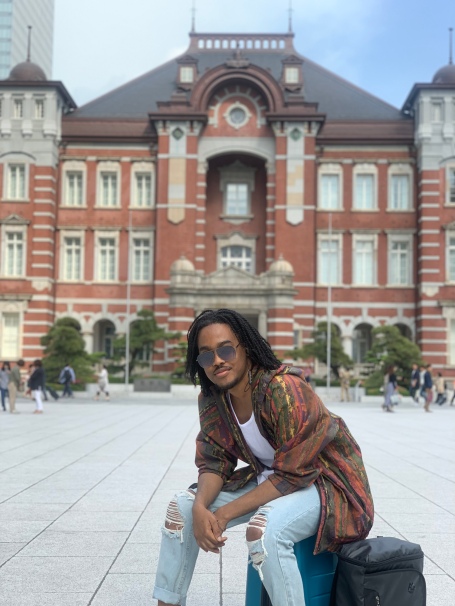 It was now time to move on from Tokyo Station (東京都) and head to the ever buzzing district of Shibuya (渋谷). I was worried about whether I’d be able to find a locker for my luggage at this station because there are only so many, and they are almost always in use. I bolted to the JR Yamanote Line, one of the main train lines in Tokyo Station (東京都), just in time to catch the 27 minute train ride from Tokyo (東京) to Shibuya (渋谷). While on the train, I thought to myself, let me check the photos once more. Bad idea! Though I was appreciative of the pictures taken by the two kind sirs (why do I keep saying that? LOL), I didn’t particularly like the fact that they didn’t come out as I expected them to. I mean, they were no Patrick Demarchelier and by no means, am I Tyson Beckford. LOL. Not even in my dreams. Dusk would be soon, which meant that the natural light from the sun would be no more. How would I get a picture of my outfit? I thought. You’d think I was some major celebrity with a huge following. I just wanted to capture a moment, a look, I probably won’t create again.

27 minutes passed and I arrived in Shibuya (渋谷). In true Shibuya (渋谷) fashion, a bevy of tourists greeted me as I exited the station. I quickly searched for an available locker and I was lucky enough to find one within minutes. Yay me! It was time to either take a video or picture of the famous Shibuya Crossing. Pedestrians gathered at the crossing as the light was about to change and in 5…4…3…2…1 the streets were filled with people, making this fun cross. If people weren’t crossing the street, they’d be trying to catch a photo of themselves in all the chaos. We had only about 25 seconds before the light changed from green to red. It’s always funny seeing people run into the street to get that perfect shot. It reminded me of a video where some performers danced to the Let It Go song where every time the light changed, they’d flock to the streets to perform their number. Not to be outdone, I didn’t let the fact that I had no equipment to help capture the perfect chaos, I pulled my phone out and did what I had to do. I had the Go-Pro experience but with an XSMax. Haha!

I headed for Starbucks because your boy was hungry. I know what you’re probably thinking. Who goes to Starbucks if they’re starved? Anyways, I got myself a grilled sandwich and the pudding a la mode frappuccino. I didn’t stay very long in Starbucks because my phone needed charging and they didn’t have any outlets. The audacity! I found the closest, if not the only Apple Store, in Shibuya (渋谷) and sat there for like an hour, maybe an hour and a half till my phone was juiced up. I knew I wanted to do some shopping while there but it would be the last thing I did before I left Shibuya (渋谷) evening. 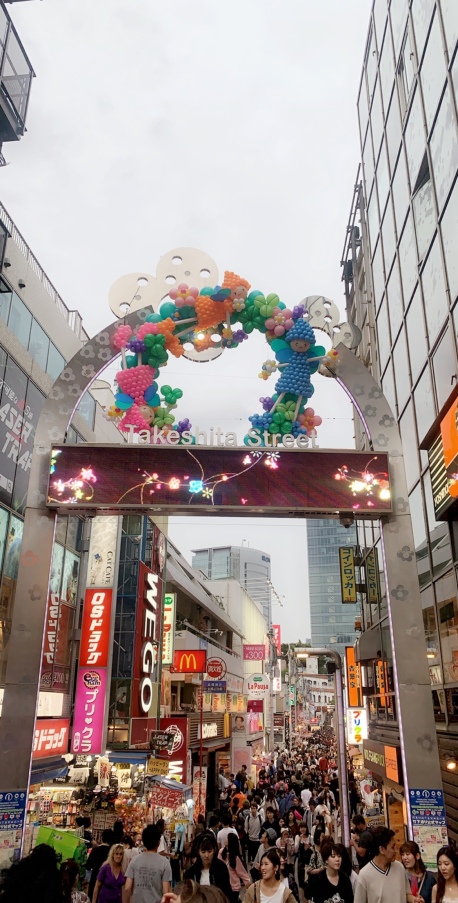 I then made my way to Harajuku (原宿) to see if there was anything exciting happening, so that I could return the next day. Harajuku (原宿) was as I expected, filled with the usual tourists and not enough of the unique fashion the area had been known for. Really upset that the thing that made Harajuku (原宿) unique is slowly eroding. I went down Takeshita Street to see if there was anything I wanted to try but before I knew, night fell and I had to leave. I hurried back to Shibuya (渋谷) and store hopped until I found a great deal on chino pants and shirts for work.